So, this service is designed to solve three similar, but still different tasks:

Depending on what result you want to achieve, you will need to use different promotion tactics.
At the end of the article, we describe the results obtained, but for now, point by point:

How to rank higher in the Suggested section of source videos in which your video has already been seen.

The first thing we need to do is open a YouTube studio, select your target video and go to the Analytics section. 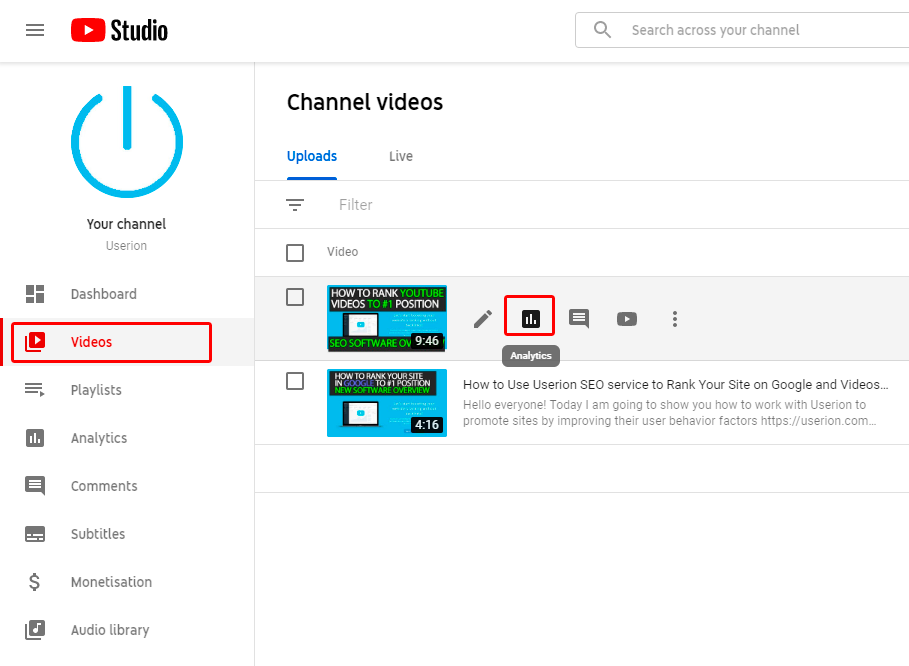 Choose a period - last 28 days. You can choose a period of less than 28 days, but try not to take longer periods to work only with the latest relevant data. 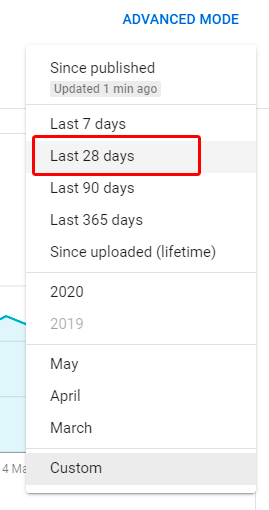 Next, go into advanced mode.

We go to the Traffic Sources tab and look for the source "Suggested Videos", click on it. 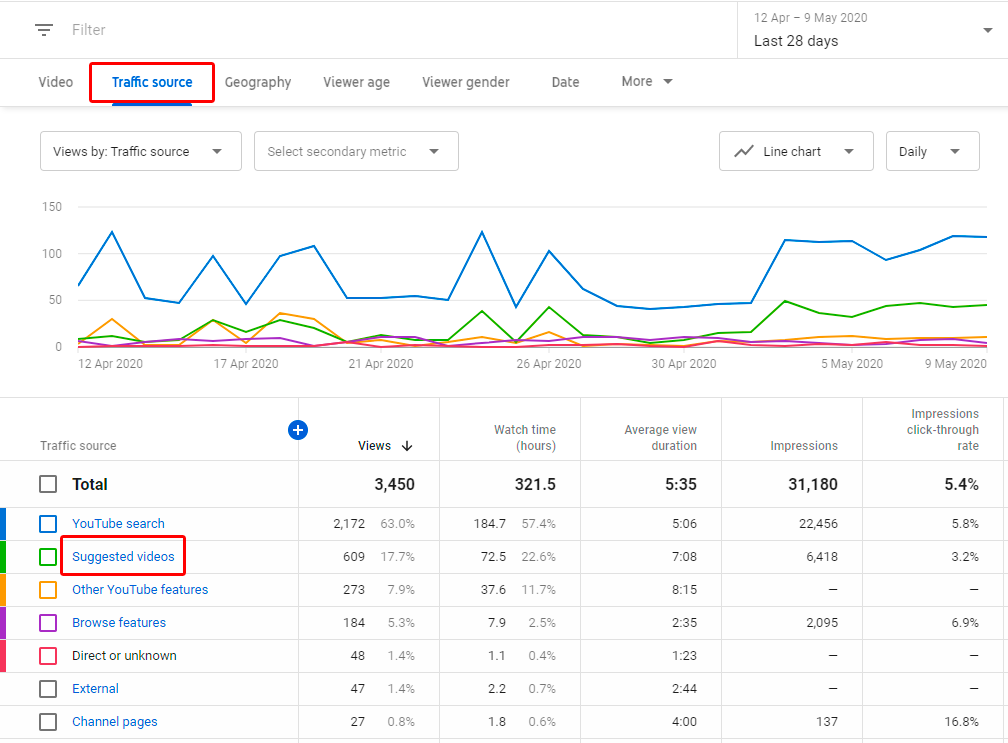 Here we see a list of sources (videos) on the pages of which your video was shown in the Suggested section, which means it already occupies some positions. (This list may include your own videos). 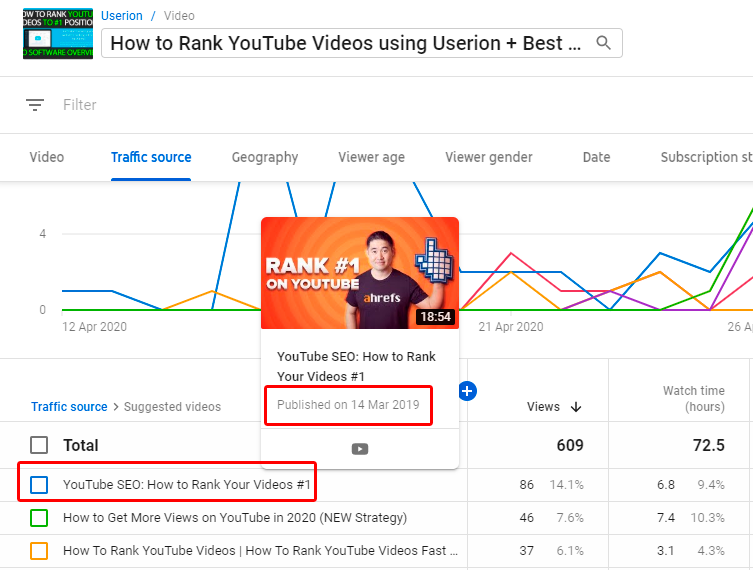 Now we only need to select the most suitable videos, in which we will improve the ranking from the Suggested section. We recommend that you follow these principles:
1. The sooner the video was published the better. If the video was published 1 month ago, it has a lot of chances to transmit as much traffic as possible to you. But if it was published 1 year ago, you are unlikely to be able to get a lot of traffic from it, even if your video rises to the first line in the Suggested section.
2. The more subscribers the channel that owns this video the better. This means that this video is more likely to receive new views, and therefore to transmit part of the traffic to you. If a video was published 1 week ago and it has 10,000 views now, while it has 500,000 subscribers, then it is very likely that the number of video views in the coming weeks will increase by several times, which means your video will have many chances to get a lot of traffic.


After the video is selected, copy its URL and go to Userion in the YouTube Suggested service. 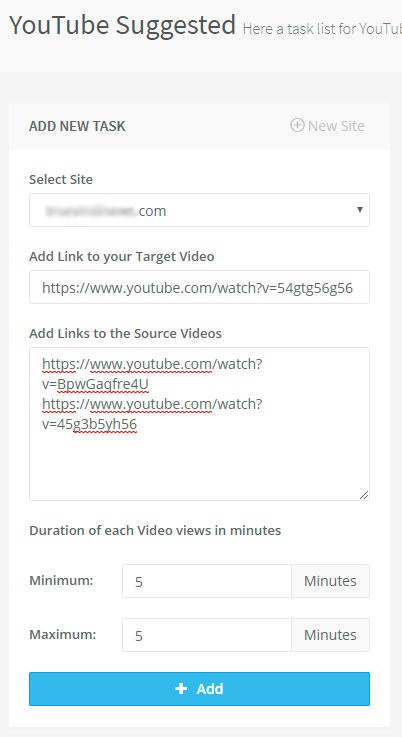 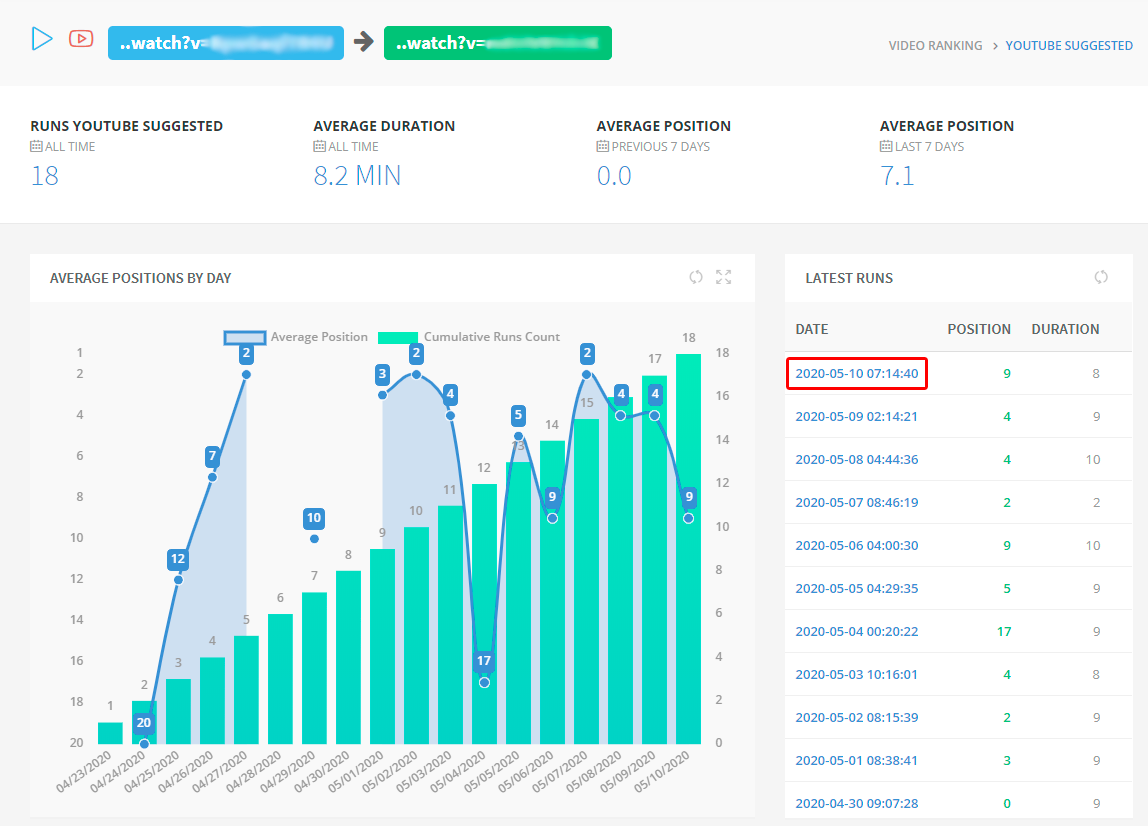 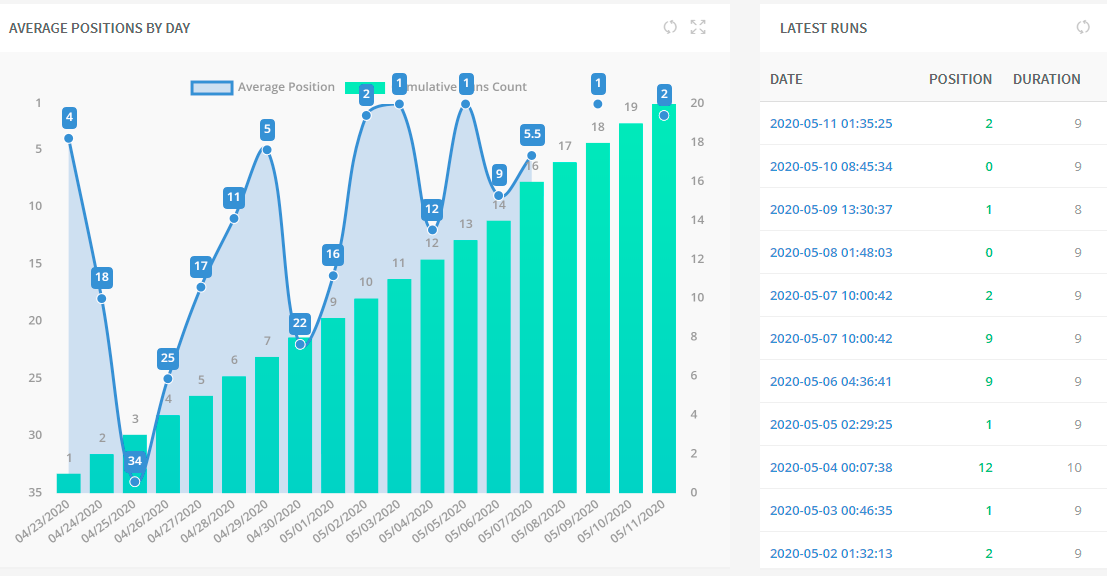 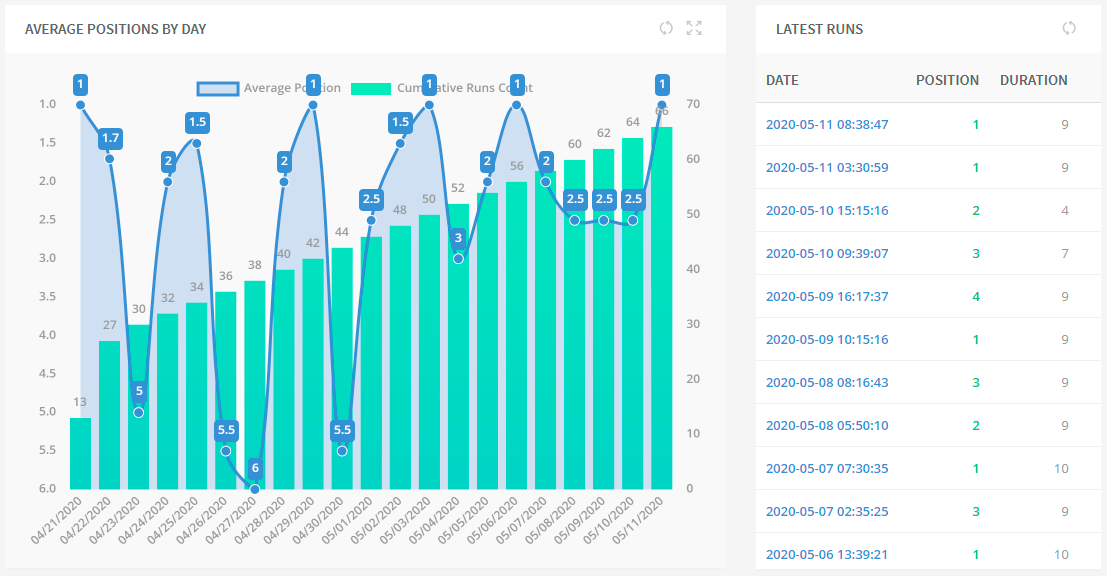 Yes, as you can see, positions jump very often, this is normal, especially at the beginning of advancement. The fact is that the YouTube algorithm shows the Suggested section on the principle of a carousel, with each page refresh you will see a different suggested video list. Over time, your video will more and more often be shown in the very first portion.
As can be seen in the screenshots - the video eventually stabilizes its position in the top.

How to try to get into the Suggested section of such a source video in which your video has never appeared.

So what to do if we really want to get into the suggested section of a very interesting video, but our video wasn’t seen there.

First you need to make sure that the video that acts as a source is really suitable for this purpose:
1. It is very important that it is as relevant as possible to your target video. It makes no sense to try to get into the suggested section of the video about cats, if your video is about cryptocurrency. Firstly, it will be difficult to do (if at all impossible), and secondly, even if it succeeds, your video will most likely not receive any traffic and will leave this section pretty quickly again.
As in the previous method:
2. The newer the video, the better.
3. The more subscribers the channel that owns this video the better.


Next, add the task to Userion. As in the previous method, provide a link to your target video, to the source video we selected, set the duration and add a task.
For this type of task, specify 5-10 runs per day. 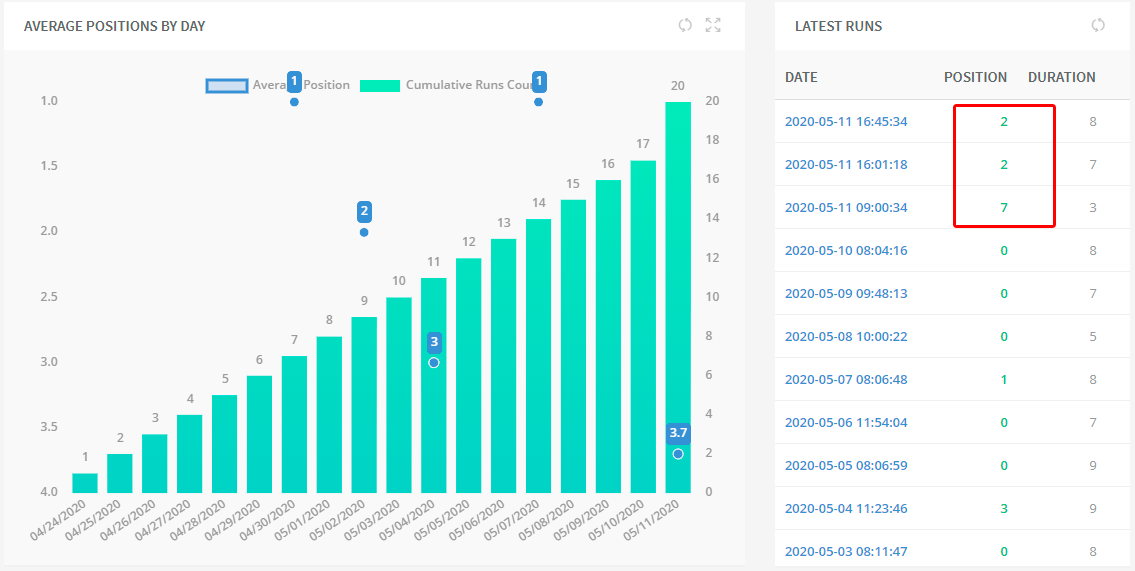 That is, the video was not initially visible in the suggested section of the target video, but then gradually began to appear.

How to get into the Suggested section of many different source videos and increase the visibility of your video many times over.

So, we pass to the most interesting part!
We will talk about how this works at the end of the article, and now we’ll deal with tactics.

For the convenience of working with this list, export it to Google Sheets tables - click on the arrow from the top right and select Google Sheets.

Great, it’s so much more convenient, since we immediately see links to the videos. I deleted the second row with the totals, it is not needed.

For convenience, I’ll do another trick, namely, I will turn the video identifiers (in the first column) into full links. To do this, I will select the entire column A, press CTRL H, and do a search and replace "YT_RELATED." (dot at the end) to "https://www.youtube.com/watch?v=", and click Replace All. If not all cells have been replaced after the replacement (strange glitch), then try to export again and immediately make the replacement. 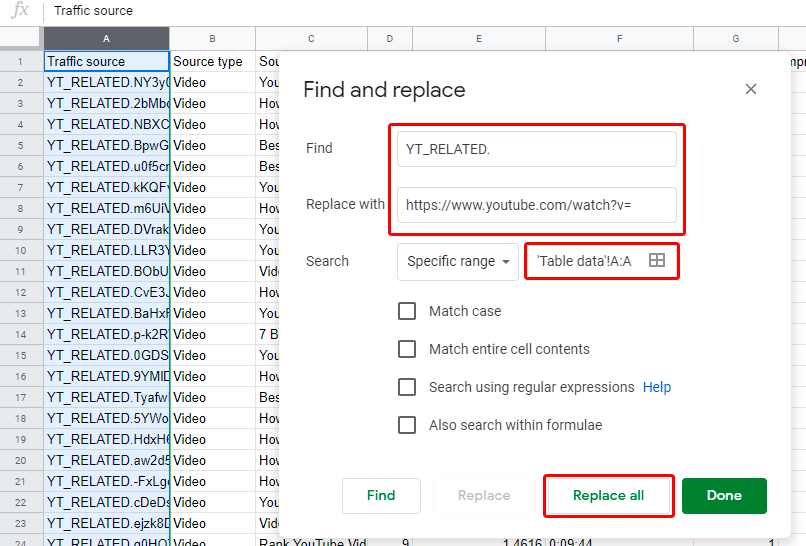 Now I’ll sort the video by the number of impressions, for this I click on any cell and select "Create new filter view", click on the impressions column and select "Sort Z - A". 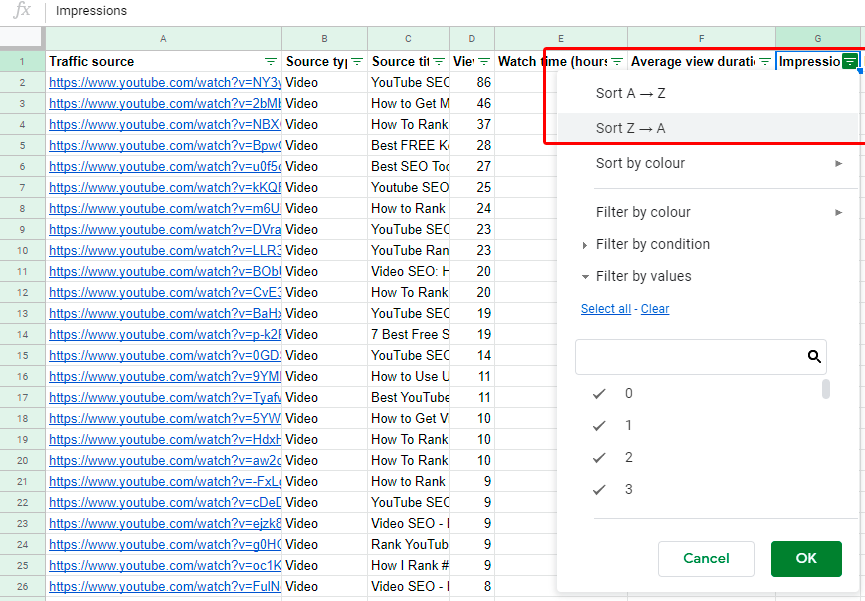 Now at the top of the list I have sources in which my video has already been shown, which means it already occupies some positions.


Now we need to select as many source videos as possible from the top of the list.
In this case, we will be guided by a simple principle - the more views the source video has, the better.


I select the first 35 (the more the better) just selecting the cells in the first column and copying. Further among them I will exclude those videos that have few views (you need to open each video and find out how many views it has). 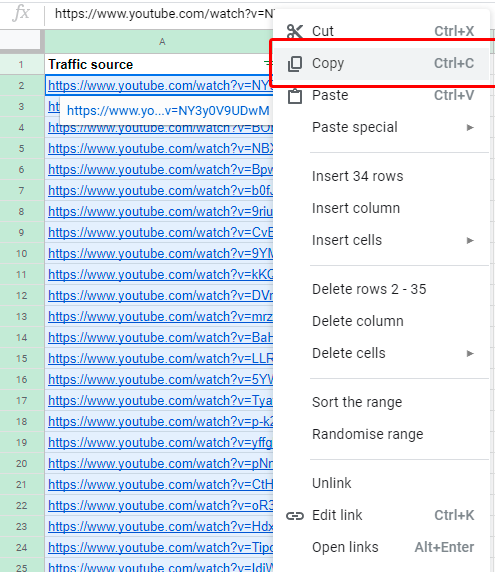 Now go to Userion and add our tasks there. As before, in the Target Video field we add a link to our video, and in the Source Videos field we add the previously selected links (just inserted CTRL + V), set the viewing duration as before, and click add.

For each task, set 1 run per day. You can track progress as always, by clicking on a task (source video link) 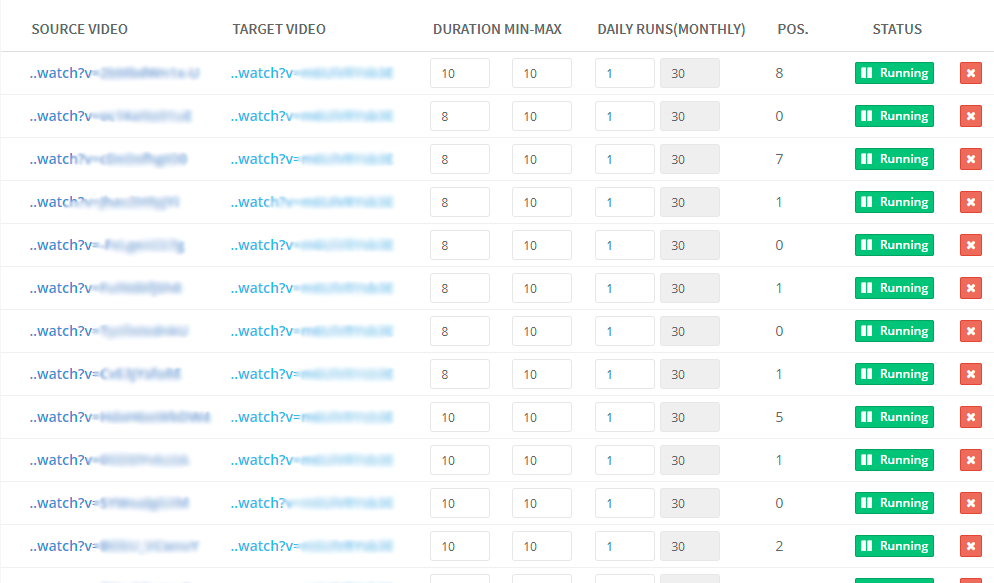 It’s not so important for us what positions your video occupies in this case, the fact that you are ranking in the suggested section of many source videos is important.

Done, now let's talk about how it works and what results we get.


So how does it work?

then we can see 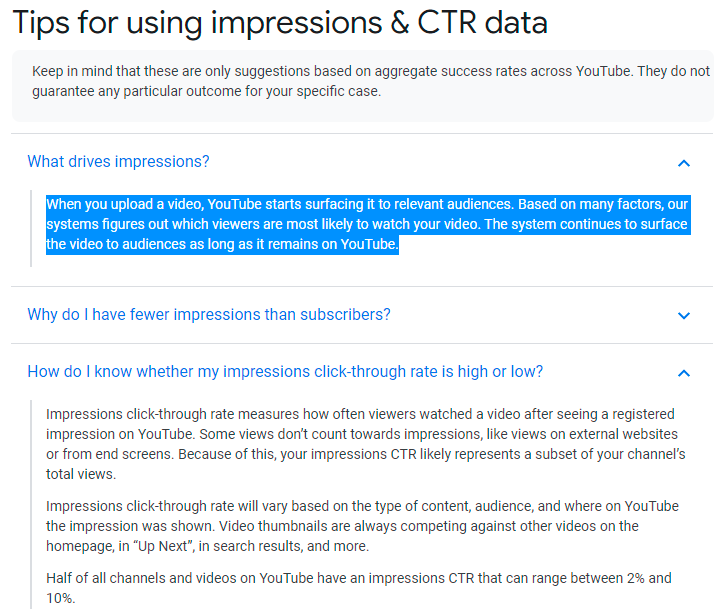 "..When you upload a video, YouTube starts surfacing it to relevant audiences. Based on many factors, our systems figures out which viewers are most likely to watch your video. The system continues to surface the video to audiences as long as it remains on YouTube ... "

"..To interpret the data, keep an eye out for low or high numbers - that's where your main learnings will be. As your content gets distributed more widely and impressions increase, viewers outside of your core audience are more likely to see your thumbnail , which may lead to a lower click-through rate ... "


Let's see what this ultimately means on a concrete example:
Suppose we have some source video (S) that Mike, Tom, and Ellis watched. Now the video S decided to watch Joe, but he also noticed that in the suggested section there is an equally interesting target video (T), which he also decided to watch.
YouTube noted that since Mike, Tom, Ellis and Joe watched S video, it means their interests are very similar. And if Joe watched the T video, then this video might be interesting to Mike, Tom, and Ellis.
Imagine that Mike, Tom, and Ellis are watching a new video (N) or some old video that they have not watched yet, which is similar to S and T. Now YouTube will show them in the suggested section our target video T.

We will not analyze in detail the ranking results for strategies 1 and 2 - everything is quite clear from the screenshots of the charts there. Let's look at one of many examples of results from strategy 3. 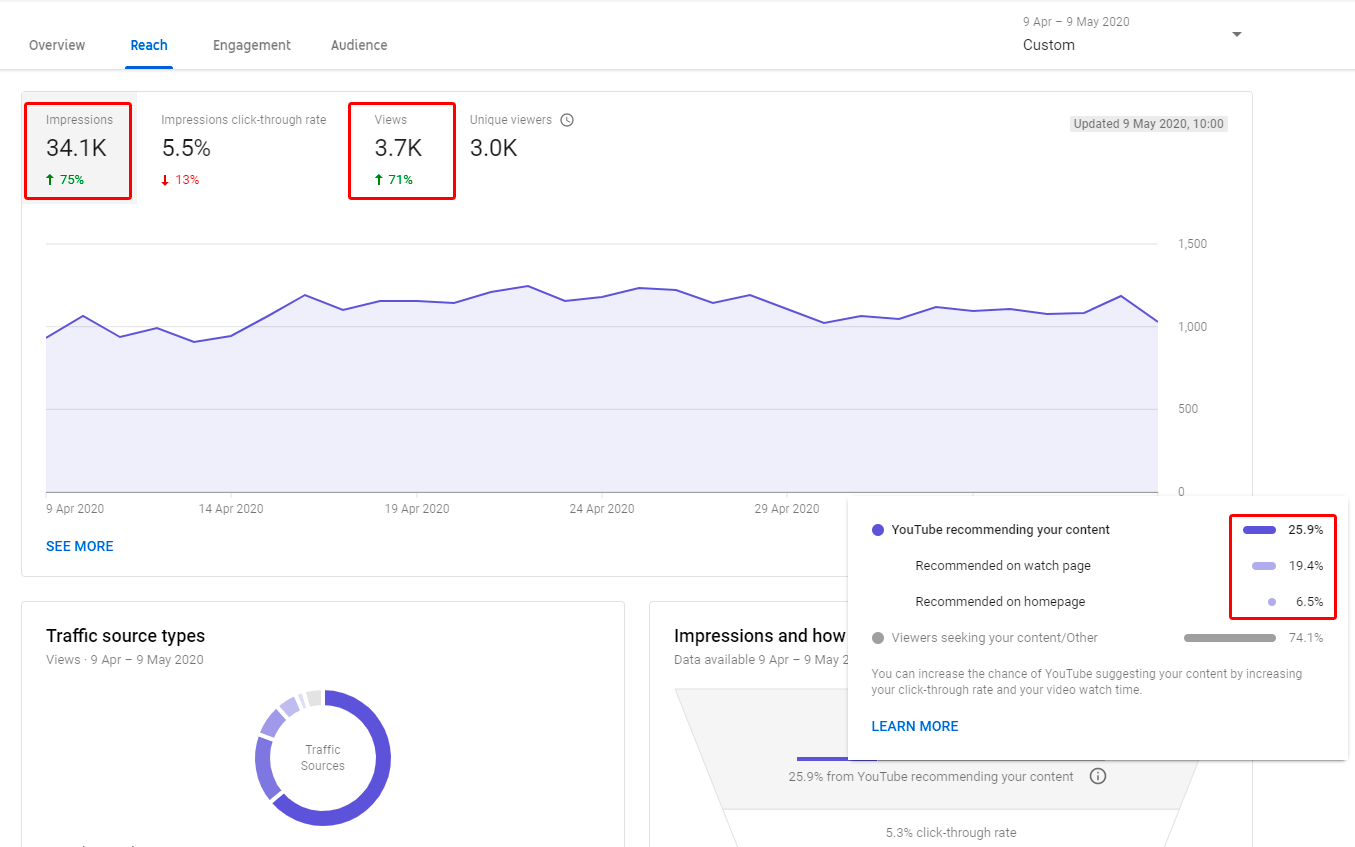 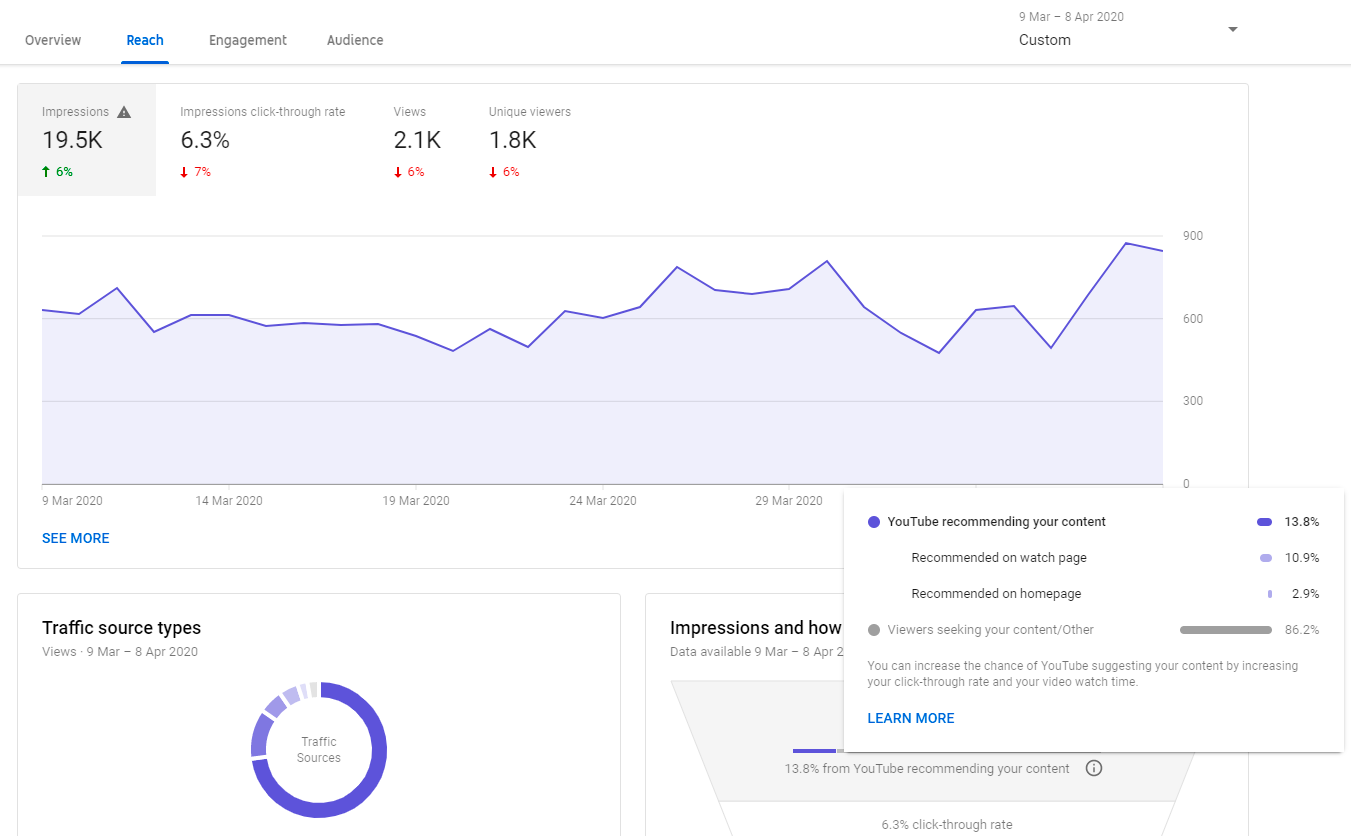